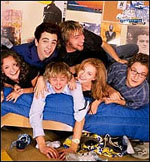 I've come to the conclusion that Freaks and Geeks is the best television show ever. Hands down. I've watched every episode a half-dozen times, and it's still perfect. One short season, and they still managed to give all the characters at least one episode where we really got to learn about them. It gave us more characterization in one episode than on the entire run of Law & Order.

That having been said, I'm glad they cancelled it. Sure, at the time it seemed like an insanely bad idea and the ultimate example of network incompetence, but in retrospect, I'm not sure I could ever be satisfied with another season. The first season ends perfectly, and watching Daniel hang out with the geeks as Lyndsey closes her relationship with Nick and becomes a Deadhead with Kim is such a perfect way to leave this world that we were so lucky to watch for eighteen hours of our lives. I'm fairly convince there is simply no way they could have continued with that level of quality for another season.

As if to underscore that point, producer/writer Judd Apatow has assembled many of the crew and a few of the cast of Freaks and Geeksfor a half-hour sitcom about college life, entitled Undeclared. Given that each episode is half as long, he loses the "Freaks" end of the equation and just focuses in on a handful of geeks, which is probably fair, given that everyone is a geek freshman year of college. Jay Baruchel plays Steven, the king of the geeks, who, while admittedly a fine geek, just doesn't have that vulnerability that John Francis Daley, Samm Levine, and Martin Starr were able to project so admirably. Carla Gallo is fine as the girl who is having trouble with her boyfriend at home (played with amazing brilliance by another Freaks and Geeks refugee, Jason Segal), but nothing special.

I don't know. The show's funny. The writing is good. The acting is good (especially Monica Keena as the initially stressed-out, now apparently drug-hazed girl). It's a good show.

But it's not Freaks and Geeks.

I know I should move on, but it's hard, especially with regular appearances by F&G cast members. I'm hoping I'll grow to accept this show as it is, but, until then, it's just kind of disappointing.

Rating: B+ (It Has Some Big Shoes to Fill)

The Hills Have Eyes 2

Studio 60 on the Sunset Strip

The Hills Have Eyes

The Exorcism of Emily Rose

We Shall All Be Healed

A Minute with Stan Hooper

Stop All the World Now

Pirates of the Caribbean

The Man Who Wasn't There

Kiss of the Dragon

Hedwig and the Angry Inch

The Abolition of Work

The Devil and the Deep Blue Sea

That Skinny Motherfucker with the High Voice?

The Terror of Mechagodzilla

Alan Mendelsohn, the Boy from Mars